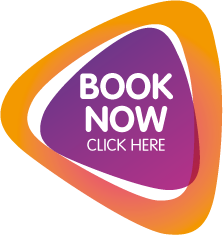 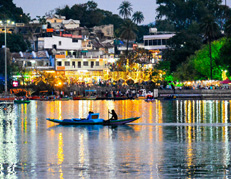 One of the most popular attractions in mount Abu, Nakki Lake is an ancient and sacred lake. According to Hindu mythology the lake was dug out by the Gods by simply using their nails to gain shelter from the Demon Bashkali, however many such mythological stories exist leading to the creation of this lake. Nevertheless, the place is a great spot for picnic with friends and family alike. The various trek spots near the lake sated my hunger for some adventure and the boating trips were relaxing under the amazing weather I experienced here. The lake is also famous as mahatma Gandhi’s ashes were immersed here leading to the construction of Gandhi Ghat, which is also a popular monument located here. There are plenty of hotels, restaurants and eateries located near the lake which offer some great local food at really cheap prices. The fountains in the lake add to its natural beauty. 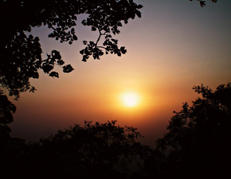 The Forest located between the Aravalli mountain range was declared as a wildlife sanctuary in 1980 and covers an area of approximately 288 sq kilometers. It is a sub tropical forest which has an abundance of various species of flora and fauna. While there are traces of past dwellings of the lion and the tiger, but as of now the prime feline predator found here is the Leopard. As I’m more of a nature hound and I like to explore the natural beauty of every place that I travel, this was just the kinda place I was looking for in the otherwise desert state of Rajasthan. The rare species found here are sambhar, common langur, wild boar, bear, pangolin, common mongoose, jungle cat, wolf, hyena, jackal, Indian fox, Indian hare, porcupine and hedgehog. These forests are also said to be the home to around 250 species of birds but the most special one is the grey jungle fowl which is unique to this area. 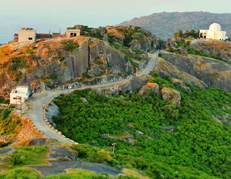 As mentioned in the prologue, Guru Shikar is the highest point in mount Abu and forms the highest point in the Aravalli mountain range. The place is perfect to get a panoramic view of the whole region and is famous for its temple of Guru Dattatreya an incarnation of the Hindu Deities ‘Brahma, Vishnu and Shiva’ in one. While many wouldn’t find much in this place apart from the various temples and the amazing views, it was quiet natural to me to take out my trusty paperback and get lost in the enticing plot amidst the enchanting surroundings. Do not forget to pack food and beverages but preferably not any alcohol as the place is considered as sacred.

Experience a perfect blend of tranquility and serenity when you step in at this peaceful park. A part of the Brahma Kumaris spiritual establishment, the park will take you away from regular city life and into a world of pure peace, beauty and spirituality. Wrapped by two famous Aravali peaks, Achalgarh and Guru Shikhar, this lovely park is a cocoon of relaxation in its own way. Managed efficiently by the Brahma Kumaris and Kumars, Peace Park is a major tourist attraction in Mount Abu. 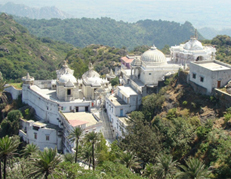 Achalgarh is a fort situated about 11 kilometres (6.8 mi) north of Mount Abu, a hill station in Rajasthan, India. The fort was originally built by the Paramara dynasty rulers and later reconstructed, renovated and named as Achalgarh by Maharana Kumbha in 1452 CE,[1] one of the 32 forts built during his reign. The fort is in a dilapidated condition now. The first gate of the fort is known as Hanumanpol, which served as the entrance to the lower fort. It comprises two towers built of large blocks of grey granite. After some ascent, stands Champapol, the second gate of the fort, which served as the entrance to the inner fort.[1]